Nitin Gadkari, India’s Minister of Road Transport and Highways, announced in December 2020 that the government is planning to remove all toll plazas on highways across the country “within the next two years.” A “GPS-based” toll collection system should replace more than 700 toll booths. The National Highway Authority of India (NHAI) is responsible for more than 130,000 km of highways and is currently expanding the highway network at an incredible pace of more than 36 kilometers newly built highways per day. According to Minister Gadkari, this rate should increase to 40 kilometers per day by 2024 while  India invests 1.4 trillion dollars in the expansion of its highway network. Once India launches its new satellite-based tolling system, it will become the largest tolling system in the world. The publicly-owned Indian Highways Management Company Limited (IHCML) is preparing a public tender for the construction of the new GNSS-based tolling system.

The largest fully electronic tolling systems in the world today use satellite positioning technology to automatically detect the exact distance that vehicles travel on a tolled road network. In a multi-lane free flow (MLFF) environment, vehicles can drive on the roads without any need to slow down or to drive in specific lanes anywhere along the tolled roads. India currently deploys electronic tolling through the use of Radio Frequency Identification (RFID) tags in the so-called FASTag system. The RFID tag is placed on the windscreen and allows the vehicle to drive through Electronic Toll Collection (ETC) lanes at toll plazas without having to come to a complete stop. Since traffic must slow down at the toll plazas to pass the ETC lanes, traffic delays are still commonplace – although dramatically improved after the FASTag became mandatory in February 2021.

In order to address the rapid growth of the highway network and the significant increase in traffic, there is a growing need to eliminate congestion at the toll plazas. As already practiced in several European countries, satellite-based tolling solutions provide a cost-effective means to establish distance-based electronic tolling on national road networks without the need for extensive roadside infrastructure.

What is GPS-based tolling?

Satellite positioning in India with GAGAN and NavIC

The Indian Space Research Organisation (ISRO) established its own satellite positioning systems for the territory of India, initially with its regional satellite-based augmentation system (SBAS) known as GAGAN (an acronym for GPS-Aided GEO Augmented Navigation). Launched in 2013, GAGAN has 15 reference stations in India and three geo-stationary satellites that improve the accuracy of the GPS signal in India to less than 3 meters. In 2018, the Indian Regional Navigation Satellite System (IRNSS), also called NavIC (an acronym for Navigation with Indian Constellation), became fully operational. Whereas GAGAN improves the accuracy of the GPS signal, NavIC sends its own signals (on different bandwidths than GPS).

The NavIC system is made up of seven satellites that cover the territory of India as well as an additional area extending 1,500 kilometers outside of India. NavIC reaches position accuracy of 7 to 10 meters, which is suitable for tracking vehicles on the Indian road network, for example. Consequently, tracking devices using NavIC and GAGAN have been mandated on all commercial vehicles in India since 2019. Now that India operates its own satellite navigation system and can also take advantage of the other GNSS constellations, satellite positioning is an ideal basis for electronic tolling throughout the country using multi-constellation GNSS chipsets.

How will GNSS-based tolling work in India?

The first MLFF toll systems (e.g. in North America, Australia, and Singapore) used microwave transponders that require the installation of gantries on each and every toll section of the tolled road network. In other words, between each set of road intersections a physical structure must be built having numerous sensors and a connection to data communication infrastructure. With GNSS-based tolling systems, heavy roadside infrastructure is no longer necessary. Instead of having an RFID or microwave tag installed in the windshield, tolled vehicles have a GNSS-based tolling device mounted either on the windshield or on the dashboard. Rather than needing physical tolling gantries, satellite-based On Board Units (OBUs) can detect virtual gantries that are defined along the tolled road network.

The OBU records the data about the road sections travelled on the tolled roads and sends the data to the tolling back office by using the cellular (mobile phone) network. If there is no GSM network available, the OBU can store the tolling data until it has connectivity at a later point in time. The tolling back office calculates the tolling fees and either issues an invoice (post-payment) or reduces that amount from the toll user’s account (pre-payment). Since these electronic toll systems are fully automated, toll road users do not need to take any action during their trips.

Does GNSS-based tolling have anything to do with GPS Imaging?

Navigation satellite systems have nothing to do with satellites that take images of the earth (and of objects on the earth’s surfaces such as vehicles on the road). The terms GPS Imaging and Georeferencing are sometimes used in the popular press in reference to satellite-based tolling systems, although these are completely different technologies that have absolutely nothing to do with each other. In fact, GPS Imaging is a technique to detect vertical land motion of the Earth’s surface.

Are users of satellite-based tolling systems tracked all the time?

When a GNSS-based OBU is installed in a vehicle, its movements can monitored. Fleet management devices, for example, can always track a vehicle’s movement. Understandably, many drivers would prefer not to be tracked by their tolling devices all the time. When road operators use GNSS-based tolling OBUs rather than RFID or microwave tags for electronic tolling, they are under the same obligation to ensure data privacy – regardless of what tolling device is used in the vehicles. In most satellite-based systems, only the virtual gantry locations are recorded by the OBU once a vehicles passes those points on a tolled road. The positioning data stored on the GNSS-OBU and then transferred to the tolling back office is typically secured with encryption to ensure that the data is not visible and cannot be compromised by others. In fact, it is much easier to ensure data protection with satellite-based tolling systems than with personal smartphones that usually track a user’s position all the time – whether driving a vehicle or not.

As the planning of the new electronic toll system in India progresses, we will provide updates about this ambitious project which will become the largest satellite-based tolling system ever implemented. 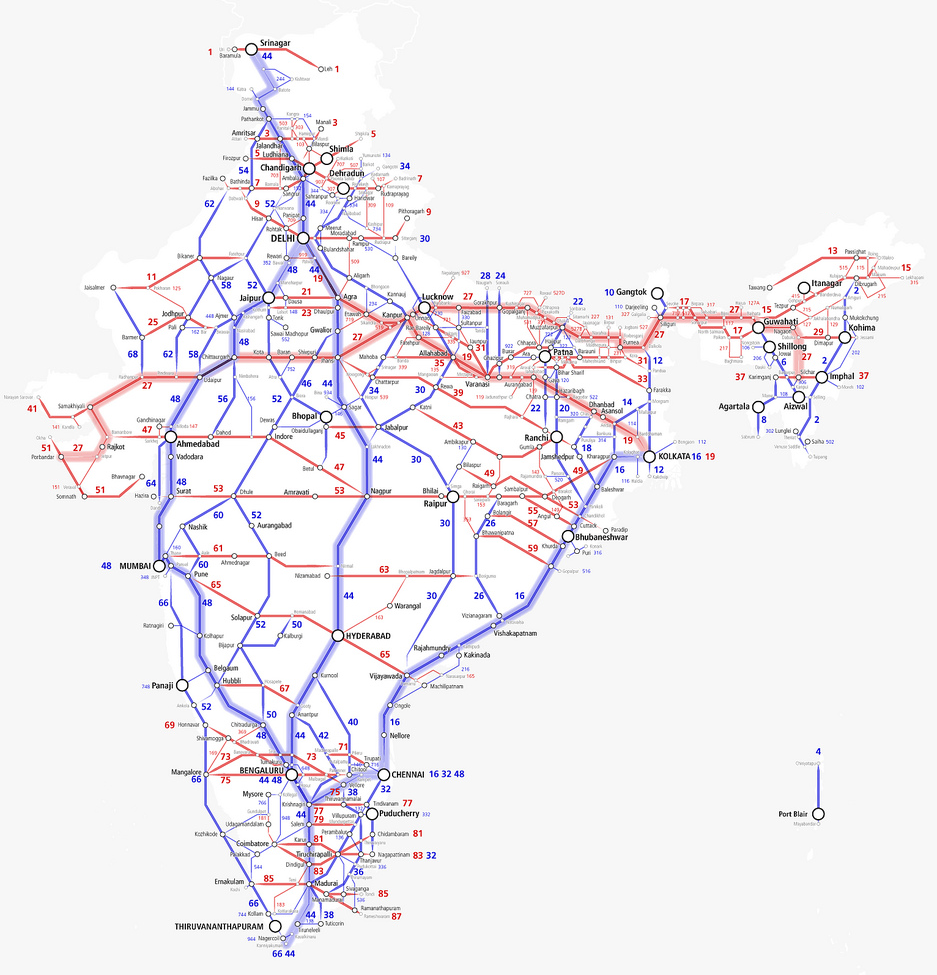 Schematic Map of the National Highway Network in India